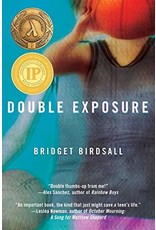 Fifteen-year-old Alyx Atlas was raised as a boy, but she knows something others don’t: she’s a girl. Born intersex, Alyx has always questioned her gender identity and struggled to fit in. But it’s after her dad dies—and after she sustains a terrible beating from her classmates—that she decides she can’t live as a boy any longer. She and her mother move from California to Wisconsin to start a new life, and Alyx begins again, this time as a girl.

Alyx quickly earns a spot on the girls’ varsity basketball team, and for the first time in her life she feels like she fits in. But as the team racks up one victory after another and the state championships approach, a jealous teammate sets her sights on Alyx. Hotheaded and fiercely competitive, Pepper Pitmani is sure Alyx is keeping a secret, which Pepper is determined to reveal. If she succeeds, the truth could destroy Alyx’s one shot—not just to take home the trophy with her team but to live as her true self.

Honest, raw, and uplifting, Double Exposure is for every teen who’s longed to be seen, struggled to find the courage to be different, or dared to face adversity head-on.